OACCE organized an exhibition paying tribute to the Bethel Burying Ground (BBG), which was a burial site once owned by Mother Bethel AME for Black Philadelphians from 1810-1861. BBG was rediscovered during the renovation of Weccacoe Playground in the Queen

Village neighborhood in 2010. There are approximately 5,000 people buried there. 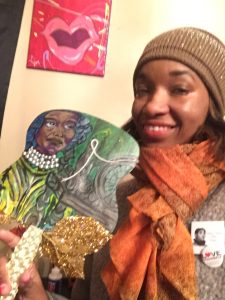 For this project,  Tu Huynh, City Hall Exhibitions Manager collaborated with Mother Bethel, Terry Buckalew and the Charles L. Blockson Afro-American Collection at Temple University Libraries, and several artist who have a deep appreciation for sacred places and Philadelphia’s Black cultural heritage. The people who were buried at BBG and the Free Black community they belonged to are part of a largely untold story of early America, and of Philadelphia in particular. This exhibit will be a way to pay our respects to them in an artistic manner. For more information, please visit the blog of historian Terry Buckalew, who has compiled burial accounts of hundreds of the interred: bethelburyinggroundproject.com .  (SOURCE: Tu Huynh, City Hall Exhibition Manager – Call for Artist).

Please, do enjoy photographs of mixed media artistry created and contributed to the Bethel Burial Ground Arts project by Maryam. Make sure to scroll down to view photographs from the January 30th Reception held in City Hall – Room 116.

“Rose From the Ashes” artistic Church Fans will represent  the graves of the 5000+ human remains laid to rest in the 19th Century African American burial ground in the 400 block of Queen Street in Philadelphia, Pennsylvania. My fine art paintings are designed to emulate what my selected muse look like in their day to day work life in 1800’s. Bethel Burying Ground purchased in 1810  by Reverend Richard Allen, and the founding trustees of the Mother Bethel African Methodist Episcopal Church.

I selected common day individuals, both freeborn to placed in refuge. The muses create a storyline that is still recognized in today’s 21st century: A young boy arrested, fluid with tears, alone and detained in a juvenile detention center  “Pennsylvania House of Refuge” – sickened from maltreatment then dies at 18 years old – Henry Harman. A young business-man working hard in a prime real estate location, fixing shoes to provide for his family, suddenly is hit by a train at 30 years old. My imagination thinks he was tied to the tracks – brutally stricken for the release of his “shop” – keeping with the times of common incident. I created his piece of what I’d imagine he’d looked like if he lived to be 65, still working as a black boot  – George Washington Nash. A man who robbed the graves for Jefferson Hospital of those who died from diseases is arrested to leave no story of his own behind beyond what is found in a 1882 newspaper seems robbed of himself – Ben Smith. There’s always the highlighted story of an African-American man. The man who is “released” or for history sake has “found freedom by purchase” then becomes a successful “huckster” (salesman) as way to provide a life for him and his. And what of the woman, some still married, working, free and some widowed. The main avenue of gaining ones freedom from slavery “Manumission” ( slave owner can give his slaves their legal freedom) was given to a woman. With her freedom she worked as a seamstress,  until she was 65 years old then became ridden with a skin disease which later laid her to rest – Janet Jones. Born in 1747, or that about – another lady free. Now, this one stood out to me in a different way. She was not released by payment. She wasn’t released by her owner. This Negro belle was born a free and stayed a freeborn African American. Living a full century – freeborn! The magnificence! The variety of life’s moment she’s witnessed as a “freeborn negro” weighs heavily on my mind. In comparison to Henry Harman who died, arrested, at 18 years old – imagine the length of life he’d if he was freeborn. This woman worked as a laundress, keeping cleanliness as her way to “fend.” Away from diseased objects and waste –  she washed clothes as a born free woman – Rebecca Miller – phenomenal – lived to be 100 years of age.

I surround your graves of the 5000+ with stars as representation of your souls twinkling – looking to be found. Your stars have shined through to us – centuries later – to release your past – guide our tomorrow. Risen. You each are being found. Rose From the Ashes as the historical wind fans the 21st century with the findings of Bethel’s Burying Grounds.